The enterprise is about to undergo a revolution. Its effects will be everywhere -- on your phones, tablets and PCs -- and, most important, in your daily interaction with the business processes that drive your company. The revolution will be built on touchscreen technology, but if you’re thinking it has already transformed the enterprise with the advent of the Apple iPad and iPhone, think again.

While current devices have clearly made touch-based computing part of our everyday lives, it has yet to take deep root in the enterprise. The primary examples are based on an operating environment -- Apple's iOS -- that was designed to run on devices optimized for viewing content, not creating it. An iPad is great if all you want to do is display something: a report, an email, a video.

But many key business processes also require a user to create, input and otherwise interact in ways that require not just touch, but keyboard or pointing-device input and other traditional forms of human-to-machine interaction that are hard to do on an iOS device.

But it's not hard on the Windows 8 operating system released by Microsoft last October. The first operating system designed to run on touchscreen PCs, tablets and phones was made for the job.

Take field service maintenance, a process that requires a technician to look at service requests and manuals on-site and key in data about repairs. Good enough on an iPad.

But field maintenance isn't just about what takes place in the field. It has many components: dispatch, parts allocation, fleet routing, reporting and compliance. And a lot of what happens has to interact with back-office systems. 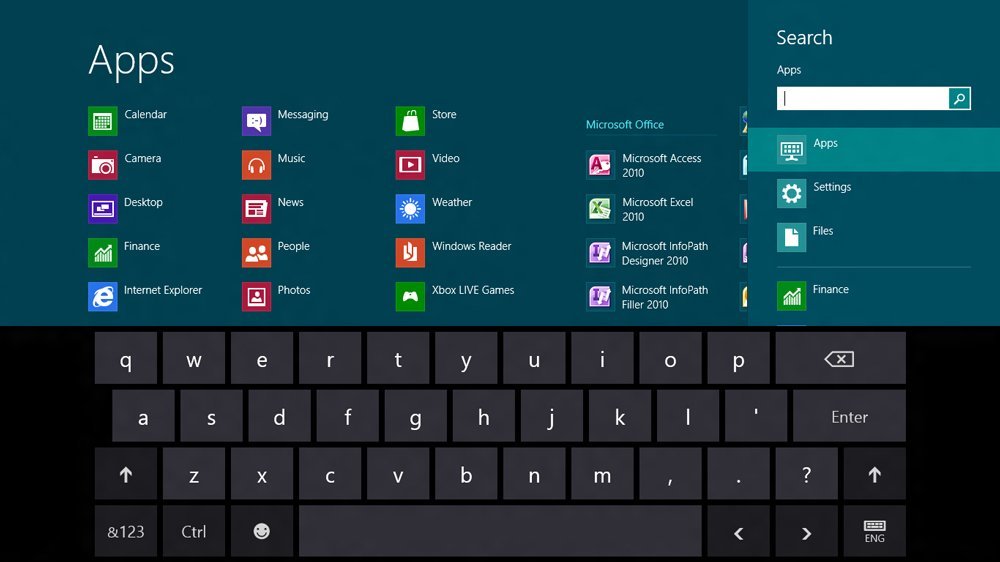 In the iPad world, a developer would have to write a set of lightweight apps that break this complex process into discrete parts. Some could run on the iPad or an iPhone, but others might be better suited for a device that offers more robust interaction modes and better back-office integration. This means creating separate code bases for the mobile touch parts in iOS and the PC-keyboard-mouse parts, which would almost certainly have to be written for Windows or Mac OS or run in a browser.

Is this an optimal way to design software?

No. The best way to run an end-to-end process is to design it as one. Splitting a business process wherever the code base must shift from one hardware device and user experience to vastly different ones isn't just inefficient, it burdens the development process with needless complexity.

There is a better way to put touch into the enterprise without breaking up business processes: Windows 8.

Windows 8 supports end-to-end business processes by offering  a development environment for apps that can combine touch and keyboard in a single code base and run on a single-purpose Windows 8 touchscreen tablet; a Microsoft Surface tablet, which comes with an optional keyboard; or a dual-mode laptop or desktop PC with touchscreen and keyboard.

For more on Windows 8

Challenges of moving to a new OS

Learn the differences of Windows 8 and RT

While Windows 8 is still relatively new and having teething problems -- Microsoft's Windows 8 phone team has dragged its feet in demonstrating precisely how its version plays in the one-size-fits-all development vision -- the new operating system makes that full-blown, end-to-end field service app -- and many others -- a real possibility.

Look at health care delivery, for example, where a doctor who is collecting data about a patient visit can use a lightweight device to input details and then move to a desktop for a full diagnostic analysis. It also applies to something as mundane as invoice reconciliation, where simple approvals can be executed on mobile devices but more complex analysis takes place on a desktop computer, all built on a single code base.

When the dust has settled on the touch revolution 2.0, we probably won't notice at all. That's because this hybrid interaction model -- touch plus keyboard -- will be as natural as touch-only is today. If you have any doubt that people already take touch for granted, just hang out with a gang of kids and a Windows 8 tablet. They get it in no time at all. Older business users might take a little time to get as comfortable with touch 2.0, but we'll get there. It won’t be long before today's iPad enterprise apps look outdated.

Joshua Greenbaum has more than 30 years of experience as computer programmer, systems analyst, author and consultant. He is an independent industry analyst and founder of Enterprise Applications Consulting in Berkeley, Calif. Follow him on Twitter: @josheac.

Article 3 of 10Next Article

Access to all of our back issues
2018
View All